ALLEGED #1M DONATION FOR THE PROCUREMENT OF ARMS BY HON MONDAY EBONG UKO, WE NOW KNOW WHO OUR ENEMY IS.

ALLEGED #1M DONATION FOR PROCUREMENT OF ARMS BY HON. EBONG UKO, WE NOW KNOW WHO OUR ENEMY IS.

The people of Abama, Ikot okim, Esa Ikwen and all the neighbouring border-villages of Obot Akara LGA, including Nkap, who face constant threat in the ongoing boundary disputes with their Igbo neighbours, especially the Ariam community of Nkwano LGA of Abia state said they have been able to identify who their enemy is, and it is one within.

In an ugly event as this, where the people are constantly on the run for dare life, thereby, ending up becoming refugees in their own place of birth and in their country, as a result of government’s inability to find a lasting solution to the disputes, all the people needs from their leaders, irrespective of political affiliations is empathy, and not people, who are supposed to be their brothers, friends, in-law, uncle and fellow indigenes dancing on their grave. The activities and false-hood campaign of a certain former commissioner, who failed in his bid to represent Obot-akara/Ikot Ekpene State Constituency in the State’s House of Assembly and that of his cohorts have been identified as ones who haven’t realised that electioneering and mud-swinging campaign period is over, most especially at a time like this that things have become so difficult.

That Hon. Monday Ebong Uko, who currently is the Commissioner and one of the political leaders from that local government, have visited the internally displaced people of Abama village so as to have the on the spot situation report, so that he can make an accurate report and briefing to Governor Udom Emmanuel, who holds the mandate to protect every Akwa Ibomites, and in the process made a donation of 1million naira to ameliorate the suffering of the people, seeing their plight should be a thing of joy and commendation from everyone of good-will, except you are an enemy. What does the bearer of this false tale want to achieve? Is it to discredit the commissioner and political leaders of Obot-akara before the governor? As a lawyer that this fellow claims he is, can he substantiate and prove beyond reasonable doubt that the #1M donation by the commissioner was for the procurement of arm as his profession requires? What kind of dirty and shameless politics are we playing? What has happen to integrity, what has happened to people? 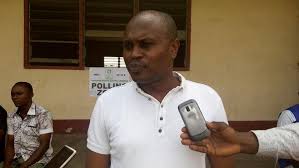 The people of Abama, who spoke through their village head, Obong Idoreyin Ekanem, frowned at such idiosyncrasy and cheap blackmail. The village head pleaded with Governor Udom Emmanuel to discard the false assertion of “his non-proactive state when it comes to security matters” as falsely credited to the sympathetic and responsible commissioner, Hon. Monday Ebong Uko by the people’s enemy. Obong Ekanem pointed out that the group of persons peddling this false-hood are not friends, but the enemies of the local government and people, who want to drag by all means those they can in the mud.  The people in an unanimous position pledged their support to Governor Udom Emmanuel should he seek a second time in office, the Commissioner, Hon. Monday Ebong Uko, Obong Chris Ekpenyong, Hon. Prince Idong-esit Ntekpere, Hon. Emmanuel Amama, Pst Nicholas Ekarika and Obong Leo Okure, whom they said have stood by them in this difficult and trying time.
at June 24, 2017