Father Umoren, the Unlikely Revolutionary in an Unlikely Place.

To The late Mohammed Ali, Nelson Mandela, Malcolm X, Fela and many that we have heard their reasons to why they abandoned the Christian faith and embraced Islam or any other religion as the case may be, few things aways stands out as their main reasons, and they are, hypocrisy,  lies, selfishness, lack of empathy, insensitivity and the clear demonstraton of caring less about the people's welfare. For these people and many others, the profesion of faith should be acompanied with the biblical proverbial "work" and the prove of care by whoever professes it, and this the above mentioned legends weren't convinced of the people and system of their encounter. 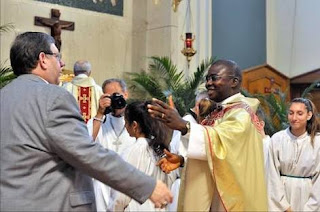 Rev. Father (Dr) Emem Umoren, the principal of St Columbanus Secondary school, Obot Akara , Akwa Ibom state is one priest, and a catholic priest for that matter that is leading the revolution in faith and action as demanded by the scripture. He has through empathy and sponsorship of over fifty (50) indidence at different level of accademic pursuit and others with personal fund point the way to the many accumulators of our stock that life is not measured by the amount of wealth one is able to accumulate, but in the little lifting of finger that ameliorates and ease the pains of our fellow humans arround us. Father Emem, whom we heard him admonishing his students at the Assembly the other day "to run away at anytime somebody slaps them" has demonstrated by his words and actions that we should be our brothers' keepers as well as live to the great ideals of being that catalyst for societal development, as demanded in the "yea are the salt of the earth's" description of the role expected of a new testament's Christian by the bible.  Funy enough it is the Catholics,  be it as an organisation or individuals that had led the pack and is still leading in living to this billing of being the catalyst for sociatal development. The Catholic mission have through out the history of the world led revolution in education, scientific discoveries and inventions and the way we relate with our world. That's touching the people directly with the goodness of God which the people can feel, not the too many fallacious promises from our other kit and kins.

Being a revolutionary isn't only in politics and governance, but a drastic new innovation outside or beyond established procedure or principle. In a society where "all man to himself and God for us all" is the established operational code, father Emem is an unusual revolutionary leading a model in an unusual place.
at October 20, 2016