The Akwa Ibom State police Public Relations officer, ASP Cordelia Nwawe has warned that the covering of plate number and tinted glasses is not allowed, except you are among the categories of people authorised by the law of the land.

Speaking to the press recently in the state’s Force Head Quarter at Ikot Apan Abia, Akwa Ibom State, the dynamic and enthusiastic police woman decried the uncooperative posture of politicians and others using the governor as shield. She pointed out that it is only Governors, Ministers and other authorise categories of officials that are permitted to use tinted glasses and siren. She warned those not the categories of persons, even if they were before  to with immediate effect dismantle their cars. 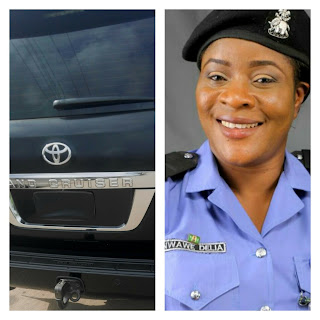 But despite this warning, some unscrupulous, though educated but illiterates politicians and elites who feels they are above the law won’t comply. These fellows are the anti-development of our land, ironically they are unfortunately the same people that are scrambling to represents us or represented us in positions that should had only gone to responsible people and not their types. Some of them are former senators, commissioners, and what have you. These people are mostly the foreign trained educated people that had lived abroad and respected the law of their respective host countries, but when they return they turn to animals in their land.
Oga politician abeg respect the law, you are not above the law.