THE MAN JUST WALKED IN!

The people had all came from across the 31 local governments’ areas of the State.

The State’s Executives and all the important personalities in the state came and drove into the mini stadium through the crowded gate with their tinted glasses where you can’t even know who’s in, except for their security details, as the protocols and security operatives made way for them in recognition of the all-important offices they hold or who they are.

The Deputy Governor came and drove in with his dark jeep also, all glass tinted. Then the man came, with all the security paraphernalia, aids, and all the other over-zealous “Do you know who I am” crew. 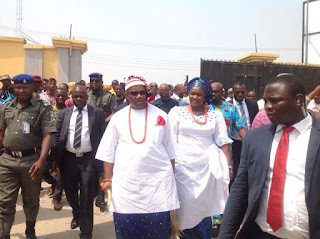 But guess what?
The man’s convoy stopped suddenly, probably on his command outside the stadium’s gate. The man then highlighted, in his dazzling, charming and handsomeness. His wife, who already knew than to stay back, followed suit.

He smiled that charming infectious smile that can melt PMB’s heart to forgive him and let him go home with all the loots he looted from the state, where he held sway as governor for eight years (That is if he actually looted the state as it is alleged), escorted by DSS,  in addition, 20% of part of the missing 2016 's budget. 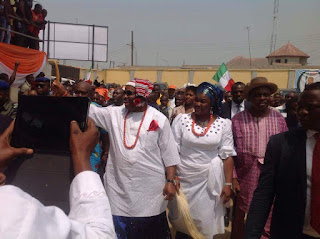 He continued to wave his elephant’s tusk in acknowledgement of the cheers and salutations from all the people who came out from across the state just to come and receive the man, who has redefine history.
He has accomplished what nobody; I mean nobody has ever done in the history of the geographical region and people call Akwa Ibom state.
Godswill Apabio walked in, he didn’t drive in like others.
at February 07, 2016