Welcome to the friends of Nigeria @friendsofnija.blogspot.com.ng

The People’s Democratic Party (PDP), the political party that ruled Nigeria, Africa’s most populous nation and biggest economy for sixteen years, has yet in another self-inflicting move that suggest that she is doomed for destruction without remedy, released another bullet that have landed on its foot.

In another “Dog meant for destruction that does not listen to the call of his master”, she has yet again disregarded and ignored reasoning and attention to the consequences of her numerous infamous actions on her image and perception before the voting public, appointed Alhaji Ali Modu Sherief, former Governor of Borno State, who has been all the while accused of having a hand or sponsoring the dreaded terrorist group, Boko Haram, as her National Chairman.

An action similar to that of others and the last administration’s appointment of Bode George’s wife as the chairman of NDLA, the pardoning of Alamiesegha, fuel scarcity probe, NGF election, dining and condoning with actions seen as negative and unacceptable in a sane society whose people yearned for a change, leading to her losing her hold on power. 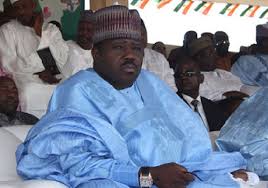 How stupid, blind and dumb can a group of people be? This people think we are still in the dark era of military regime, where anything can be forced down the throats of the people by a group of selfish ones. They refused to realise that the social media, trends and the demands of the time has thrown open a new frontier where citizens can accurately analyse actions and inactions of individuals, group of people or an organisation, and at such form an opinion that would informed their actions and perceptions toward the subject matter.

Though the new helmsman of the party which once ignored the reality of her actions and inactions  and boasted of being in power for the next sixty years, has again, over confidently and ignorantly declared that they would unfailingly dislodged the ruling party, APC from Aso Rock come 2019. But whether they have a magic wand to wave for the voting public to ignore their battered and unfavourable image and perceptions remain to be seen!
at February 18, 2016