BUDGET PADDING, THE TRADITION OF CORRUPTION AND WHY NIGERIANS SHOULD BE HAPPY!

“NOT BUSINESS AS USUAL!” 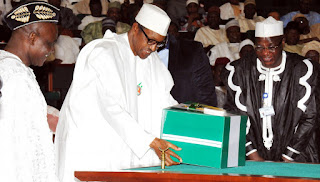 The revelation of padding and inflated figures surrounding the 2016’s budget should call for celebration among Nigerians, instead of the bad mouthing and the denigrating of PMB’s governments and the allusion of incompetence among Nigerians and foreign media.

Ministers disowning their budgets, conflicting figures here and there and accusing fingers pointing at civil servants is something we have never seen before. We should be happy for one thing, and that is the fact that before now, it would have just passed and some few individuals would become richer with everyone’s money. They all know that that is what used to happen. From the Budget planning office, to the ministries’ top officers from the rank of deputy directors, directors, permanent secretaries, ministers, the National Assembly themselves and the presidency, they all know.

As a friend who once worked with the Universal Basic Education (UBE) Board of the Ministry of Education relieve how they used to be lodged in an exclusive 5 star hotel in Obudu Cattle Ranch, Cross River State, along with some other lucky staff of the Board for three (3) days, while the directors and any other influential person in the country that have associated interest with the ministry would fly in and out with assorted girls, while they pad the budget base on the template that was given them by the budget planning office. My friend said it used to be one exercise they used to all looked forward to, everyone lobbying and playing into their various Heads of Departments so that they would be considered for the budget stuffs. He gave the figure they used to get as a one off Six Hundred and Eighty Thousand Naira, (N680, 000.00) payment for three days work, minus feeding and other allowances. Mehn Who said that isn’t a good business? 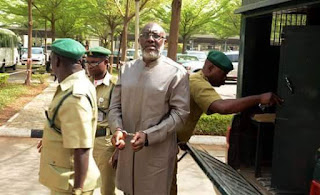 Guess what! Nobody used to talk about it. It was already a tradition and everyone from the days of Obasanjo, Yar’Adua, Tafawa Belewa, Shenekan, IBB and all of them civil servants, owa tipe, e don tey! That is why it is not surprising when Millions of dollars and some more unspecified ‘shiity’ amounts was found in the soak away and possession of former Chief of Naval Staff, properties and other assets running into billions with Alex Badeh, former Chief of Defence Staff, Gen. Ihejirika and others.

Now tell me how can they fight? Before now a soldier used to live by the hour and for the day. You would hear them said often “Na one bullet na im go kill man!” They don’t used to save or make plans or any of such things. All they were interested was to have sex and procreate more children, believing and accepting that they might die any moment soon. That was when the military used to be the pride of the nation. But today when an Army General would steal some whopping cool billions and more, that means the man isn’t in anyway ready to fucking die soon, thus the reason he would sabotage the country he swore to protect with his life and aid politicians to destroy it. 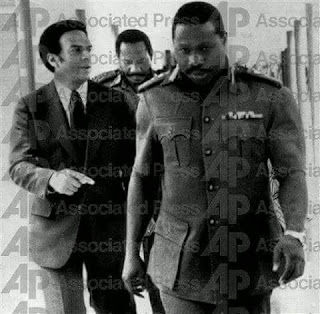 Even if PMB hasn’t succeeded in reversing the dollar to one Naira as he promised during his campaign which we all knew he can’t, we should all be happy that Liar Mohammed, the guy at the Health ministry, Iseac Adewole and others are disowning their budgets. Ameachi, Fayemi, Fash and the rest are behaving, Ricky Tarfa is being prosecuted, a judge jailed in Bauchi, Tompolo seized to be a government, Metu in handcuffs and Dezienyi,  former NIMASA boss, Aleru and others on wheelchair.
I know the Senate President, Dr. Bukola Saraki, Kwankaso, Jagaban and the others that waved the broom for GEJ to be dethroned might be regretting that decision now! “If they have known they wouldn’t had crucified the Lord of glory” But as we all come to understand, “God is a Nigerian”. And, “All things workth together for good to them that love God, and to them that are call according by his purpose”. Nigeria is God’s purpose!
With PMB, let the game begin!
at February 14, 2016