With Rev. Cleopas, Akwa Ibom is revamping inside out.

“The presence of the oracle of God in any city is the salvation of that city” Said Bishop David Oyedepo, in this year’s Shiloh, the annual revival and divine intervention gathering of Winners Chapel ministry.

This pointer could be said to be the scenario in the experienced developmental growth that took place in Akwa Ibom state in the last decades. And a group of people is behind this.

For any individual or people to experience any accomplishment in life, there is always a price to be paid. And when a group of concern ministers, under the auspices of the Old Itu, Liberation team, coordinated by Rev. Joshua Christopher Cleopas set out to began to petition God on behalf of the state that was plaque with shame,  degradation, lack of accomplishment, house boys and house girls syndrome and all the indices of a fail and backward people prior to 2003, little did anyone expect any good to come from the assembling of the team, who recently adopt Global Community Liberation Mission international (GCLMI) as her name to clear the confusion and restrictions associated to the former name.

And when suddenly one Cyrus, in the person of former Governor Godswill Obot Akpabio started engaging in several developmental strides in the state, consolidating on the gains and success of his predecessor, Obong Victor Attah, many thought it was just the time that was ripe, without pausing to consider the underlying spiritual transactions that took place in the spiritual arena, away from the knowing of the undiscerning man. As the scripture states in Matthew9:17, “NEITHER DO PEOPLE POUR NEW WINE IN OLD WINESKIN”, the recent positive development that took place in the state, which has so much lifted the Psyche of a people that were once so badly battered and demoralized mentally and psychological, and as a result conditioned to servitude, couldn’t have been made possible without the price that was paid spiritually through the activities of Rev Joshua and his men. 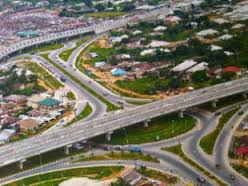 Rev Cleopas, who was explicitly told by God that for the state to experience any meaningful development, she has to appease the blood of slaves and people killed for ritual purposes by their ancestors, appease the killing of twins and the banishment of twins mothers, as practice before, above all reconcile and travel to Scotland to seek for forgiveness from Ma, Mary Slessor, the Scottish missionary and the others that were badly treated by the people in those days.
Watch out for updates on the activities of this group, cos you, your family and community are going to need them.
at December 12, 2015