To this man, Akpabio can never be wrong. (photo) 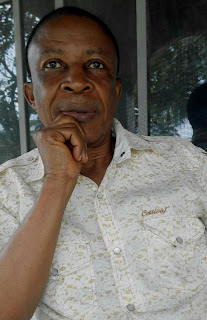 He goes by the name Sammy Okorukpong, but I call him simply Mr. Sammy. Mr Sammy has seen it all, he has seen and experienced the blunts of the selfishness of organised religious congregation, where the leader admonishes you to count as vain and summit at the feet of the master all that you have, while he gathers them and built a heaven for himself and his family on earth, while they point you to the one neither they nor you have seen. Mr. Sammy has experienced and know what it is like, the blunt of being deliberately murdered and made to pay for a crime you did not commit because you are a minority in the zoo republic, sorry republic of liars, sorry I meant to say the FEDERAL REPUBLIC OF NIGERIA, when he watched as a little boy the pogrom on his people, in the old Ikot Ekpene Division of the former ANNANG province of the former Eastern Region of the federal republic of Nigeria during the civil war they did not cause. He felt and still tells the story of the cruelty of the neighbours, who are their own brothers, as they turned round to sabotaged and even stripped the Annangs of the little life some of them that managed to escape the sword of Gowon and Ojukwu in their own land, sometimes killing some of them. 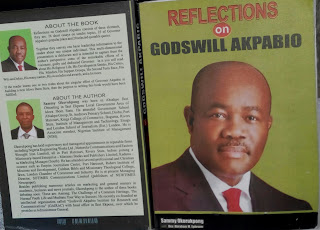 Of more painful to Mr. Sammy as he comes to terms with the reality of the routine in his country, is the deliberate attempt by the generations of evil perpetrators to distort facts and subsumed history by misrepresenting the Annang nation and man in every attempted literature. All thanks to lack of dynamic leadership among the Annangs that would, without any sentimental tradition and culture of little minds which think that life consists of only cars, houses and foolish arrogance, after enriching themselves with everybody’s common wealth and stagnating the land and the people. After years of service with a foreign engineering firm in Port-Harcourt, Mr. Sammy also attended and obtained a diploma in Journalism in UK, just because he has come to believe that if you don’t tell your story as a people, the ‘conquest supremacists’ would subsume you with their lies and misrepresentation. To this people, they want to be the master, and you the subordinate.

Mr. Sammy now, from his own Engineering Company now in Calabar, also set up ‘SOTIMES Communications’, where he started publishing ‘Annang Today’ News pepper, a newspaper that reports and exist to represent the voice of the Annang nation in Nigeria. He later added
NewTimes newspaper also to appeal to the other blocks of the society. He also has to his credit a yet to be released book titled ‘Annang, Organise Or Sink”
When the zoning system of PDP arm-twisted and forced the supremacist to concede the opportunity to govern the state to the Ikot Ekpene Senatorial district, as enshrined in the party’s constitution, Akpabio, then a commissioner, against the wish and the plans of the godfathers to still keep their treasured birth right near home sprang a surprise and clinched the ticket. Since then, “having failed in their grand orchestration and machination, they constituted into an opposition, that nothing Akpabio does pleased them” Mr. Sammy told me.

In order to be the counter voice of the lying opposition, and centre of the Annang’s voice, Mr. Sammy closed down his firm and commits himself totally to the course of the Annang emancipation and his research journalism and documentations that started challenging the position and representation of the evil groups of “Uziah”. Not knowing that he was coming against a force well organised with endless financial power, Mr. Sammy braced the odd, he and some loyal disciples like him in their little corners, holding on tenaciously to their faith and believe in Akpabio, the only leader that has risen above board and pettiness as characterised with the leaders in time past.

Mr. Sammy criss-crossed the nooks and crannies of Akwa Ibom and the old Cross River state to unearth and project anything worth emphasising on that which has to do with the Annang nation. He even identified some noble and truth-loving Ibibios, Effiks and other ethnic groups, interviewed and documents their thoughts in relation to what has been on ground as regard to the Akwa Ibom’s posterity and Akpabio as the new era leader. Selflessly with personal funds with no government or any group’s supports, Mr. Sammy published a 200-page book, titled “Reflections on Godswil Akpabio” a unique book like none before, on the charismatic and developmental leadership style of the ex-governor, quietly, without publicity traversed the nook and crannies of the nation where the ex-governor had engagements, including overseas to document his other sides and other unofficial jokes of the ex-governor, which Mr. Sammy sparks of dynamism and worth capturing and saving for future generations, against history (‘Subsumers’) of the evil descendants of the generations of evil doers.

When we talk about true discipleship and selfless followers that needs to be rewarded, Mr. Sammy, his sister who is a grandmother in her late sixties, and others I have come in contact with in the course of researching for this piece strike me and anyone of those genuine followers, not those who follows, and sing “hosanna!” today because of the fish and bread they get and “crucify him!” the next day like the ‘Akpabiosm and other concepts of the many hypocrites” that chanted Akpabio in his days and are calling for his neck the next day.

I was with Mr. Sammy the other day that I travelled down to his home on Spring Road in Ikot Ekpene, in Akwa-Ibom state, when rumours went out from those that are bent on seeing the ex-governor crucified on ‘Haman’s gallows “That the ex-governor has been picked up by the police in his Esien udim local government’s home” Mr. Sammy ran out, and put a call at once to his sister, who was at the farm. And in a jiffy, Mma Nwa as he referred to her was home, and were crying and wailing “Yes these people have finally succeeded” as if lamenting for the loss of a loved one.

Though Mr. Sammy is kind of over-stretched financially now, after publishing over three thousand copies of “The Reflections” without the opportunity to present to the ex-governor, having been systematically kept and shielded away from him in his time as the governor by his aides, he is not deterred, even as he finds it difficult these days to publish his Annang and NewTimes Newspapers respectively.
While Mr. Sammy is still optimistic that one of these days he would eventually manage to see and present his book, “The Reflections” to the former governor, now Senator possibly as a birth day gift between now and the senator’s next birthday, I decided to put this piece together for posterity, that even if Mr. Sammy and the real revolutionaries of our time remain unsung today, let it be that at least someone has noticed, and has decided to, even not all, celebrate self-less acts like this that are in uncountable lots in our society.

For Reflections, and the jokes of former governor Akpabio, visit www.friendsofnija.blogspot.com.ng and contact us for a copy to be delivered to you. anywhere across the globe the moment it has been officially presented to the Senator..