THE Presidency and the Independent National Electoral Commission (INEC), have denied alleged plot to remove Prof Attahiru Jega, saying it is mischievous and unfounded. A source in the Office of the National Security Adviser disclosed this yesterday in Abuja to reporters that “the rumoured sack of Jega is not from the Presidency but part of the propaganda by the opposition to soil the good name of the President, to discredit the government and cause trouble”. 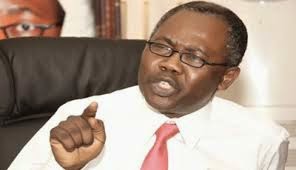 He said it would be important if politicians take precautions in making such damaging utterance as such falsehood is capable of inciting violence and unnecessarily heat up the polity. He said the constitution is well respected by the decision making process in the country and as well as in the discharge of duties, therefore it would be foolhardy for some people to assume that an official of government would be sacked or dislodged from his responsibilities for personal interest including the office of the Chairman of INEC or any official for that matter.“The questions of leave or no leave, the laws are clear about it and the Government has nothing to do with that. The man has a job to do and please allow him to do the job without dragging the government into it and the man working under the rule of law”.

“This is the government that has been obeying the rule of law and is not going to abandon its adherence to it. Please they should allow Jega to do his work and stop heating up the polity. They should stop fanning the embers of trouble and inciting people into violence,” the source added. Chief Press Secretary to INEC chairman, Kayode Idowu disclosed yesterday that rather than proceeding on a compulsory leave as it is been rumored, Jega is focused on using the extension of the 2015 polls to perfect the commission’s strategies to conduct what would be seen as the best election in the nation’s history. He noted that the appointment of the INEC chairman was not under the Nigerian Civil Service Rules, stressing that even if his service would not be renewed by the Federal Government, he would serve out his tenure which he noted would elapse on June 30, 2015. There has been reports that the INEC chairman would be asked to proceed on a compulsory leave on March 1, adding that the federal government has commenced the search for his replacement who would conduct the 2015 elections.

Idowu also disclosed that the ballot papers for Nigeria’s presidential election scheduled to hold on 28 March were ready, stressing that they have been in safe custody at the vault of the Central Bank of Nigeria (CBN), waiting for deployments to the various states. He also disclosed that thousands of ad hoc staff were being trained for the elections initially billed to take place on February 14 and 28 but shifted to March 28 and April 11.