Politicization Of Military And Security In Nigeria By Colonel Sagir Musa


As I stumbled with the so called "Army Officers" Open Letter to President Jonathan in Sahara Reporters and in view of the allegations contained in the report, I feel obligated to briefly share an aspect of my operational experiences despite my academically crowded schedules. For the sake of posterity, the senior officer whose name was specifically mentioned in the report is the last officer to illegally and selfishly tinker with operational funds. Majority of those who knows him, especially those who worked with him as commander of the defunct JTF OPERATION Restore Order 1 in Maiduguri will eagerly dismiss such accusation.------Call from Sahara Reorters
by Col. Sagir Musa Feb 06, 2015

The practice of mysterious letters against the Nigerian Army and unauthorised disclosure of information to the press allegedly by a few army personnel operating in the North Eastern part of Nigeria is a matter of serious concern to those in the security profession and indeed to well-meaning Nigerians.
This tediously repetitious practice is against military tradition, is evil and gross indiscipline per excellence!  The practice, portend great danger to the cohesion, espirit de corps and fighting spirit of the military as well as capable of further undermining the security of the nation. World over, major organisations have internal mechanisms for dealing with grievances or complains and seeking for redress through appropriate channel of communication. Proper channel of communication has been and will continue to be a standing, an in - house military tradition in the resolution of grievances. All military personnel are very much aware of this opportunity and are encourage to utilise it in presenting complains and in seeking for redress.
Nigerian troops
Militarily, I, doubt, very strongly, if any officer of the Nigerian Armed Forces - particularly the Nigerian Army can write an open direct letter against his senior officers to the President, C - IN - C. It is unthinkable to contemplate such a gross misconduct,since it is against our professional formation and is extremely legally actionable in military law. As for those astonished with the spurious letters, regard it as the handiwork of waggish elements - gory actions that will do no good to anyone!
There appears to be a growing pattern, particularly in the social and broadcast media targeted at distracting and undermining the efforts of those who are risking their lives for the sake of the nation. The trend is not new and does not come as a surprise to Nigerian military's tactical and strategic thinkers as this is always factored in to our operational planning and executions. As experts would want us to believe, - it is a known terrain! Most of the publications in these media platforms are deliberately against the Nigerian Army because the contents, context and outlook of the storylines appear to be politically situated and motivated.  Though, Buzan, Weave and de Wilde (1998), theorised that "Security" - "is the move that takes politics beyond the established rules of the game and frames the issue either as special kind of politics or above politics. Securitisation can thus be seen as a more extreme version of politicisation….. Depending upon circumstances, any issue can end up in any part of the spectrum ". 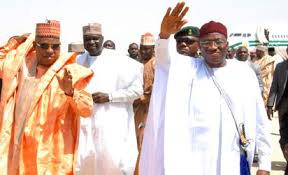 But, the increasing negative narratives on the military's failure to destroy terrorism, the baseless assertion that Boko Haram Terrorists are better armed than the Nigerian Army, to the mysterious letters to the President and the alleged looting of monies meant for operations by the senior army officers - is the crudest form of politicisation, stultification and trivialisation of military and security in Nigeria. The Nigerian Army's financial system, its layers of accounting systems - are all subject to scrutiny - from the office of the Auditor General of the Federation, Senate and House of Representatives Committees for Defence to Ministry of Defence and intra service auditors in the respective services makes it difficult to loot or interfere with money meant for operations as allegedly reported.
As I stumbled with the so called "Army Officers" Open Letter to President Jonathan in Sahara Reporters and in view of the allegations contained in the report, I feel obligated to briefly share an aspect of my operational experiences despite my academically crowded schedules. For the sake of posterity, the senior officer whose name was specifically mentioned in the report is the last officer to illegally and selfishly tinker with operational funds. Majority of those who knows him, especially those who worked with him as commander of the defunct JTF OPERATION Restore Order 1 in Maiduguri will eagerly dismiss such accusation. General JAH Ewansiha is certainly a gentleman senior officer that is morally upright, religiously sound and professionally inflexible. He is patient, at the same time a choleric army officer.
In the North East operations, many officers have been relieved of their appointments, some are court marshalled and jailed, while others are retired and many are been tried on account of one infraction or the other. As a result, there could be some that are psychologically and professionally wounded - (not injuries of the battlefield). And it seems, some of those affected are nursing injuries and trying to get back at the General whose duty as Chief of Army Training and Operations is partly to ensure strict discipline and success of the operations. In the course of executing these functions, many heads really trundles. No wonder, the upsurge in the anonymous media campaigns against the operations in the North East.
issues. At the moment, General Ewansiha is one of the most respected Generals in the Nigerian Army. This testimony could be crosschecked any time not only in the military but also with the present civil authority in Borno State who had reasons to interact with him on many security
On The Putative Plot For Interim Government By Senior Army Officers
The report of the alleged plans by the senior army officers to hijack power through the formation of interim government under Lt Gen Kenneth Minimah is bunkum, insidious and further expands the freewheeling nature of journalism as a profession. In Security and intelligence phraseology, there is what is often termed as pre-emptive intelligence as well as over or under assessment of intelligence and failure to correctly join the dots. If the Nigerian Army can be mirrored or analysed within the intellectual hypotheses of these sources,  with specific reference to  national security, political state of the nation and current army leadership - than one wonders - what is the origin, basis, intention and significance of the report?
I am not looking at the cracks of speculative journalism or historiography of military intervention in Nigeria, but the characters and commitment of the crop of top army officers in Nigeria today. Most of the senior army officers were either Brigade Commanders, Field Commanders or GOCs when the nation, somehow, had no Head of State occasioned by the ill health of President Umar Musa Yaradua of blessed memory. The same officers, under the command of Lt Gen Danbazau as Chief of Army Staff believe it unimaginable to tinker with the political permutation of the nation. For officers with such sterling professional disposition and unshakeable loyalty to the nation, I see no reason why they should be accused of a plot to involve in any political contraption called interim government.
For the avoidance of doubt, - General Minimah and his team are highly professional, perceptibly apolitical and have been consistently allergic to any form of military incursion in the political space of the nation. The

Nigerian Army is eager for the nation to have peaceful, credible, free and fair elections as scheduled by the electoral umpire. And so, the issue of fictional interim government or any form of political contraption is a plan by puckish elements to drag the Nigerian military in to their political battlefield. It is high time for the nation to rally round security agencies in contending with the ferocious crisis and challenges of insecurity in Nigeria.
at February 06, 2015