Is Sanusi right about the Yoruba people and their politics?

Doesn't actions and comments like these by some Yoruba elders clearly re-firm and confirm Sanusi's possition on the Yorubas as the problem of this country?


"Them say him no qualify. Even if he qualify or he no qualify he MUST RUN-- Bola Ahmed Tinubu at the APC campaign ground at the Teslim Balogun Stadium, failing to caution himself that he's supposed to be a leader, and that laws were made to guide and regulate us all..

Is coming to the public to tear your membership card the best route an OBJ, an elderly State man and three times leader of the most populous black nation on the surface of the earth could take to address perceived ill treatment by the party through which he led the country for eight consecutive years? What about restrain, wisdom, and patience which should abide with the elderly? See that one dey even dey tearam and dey happi like some small little rascal boy. 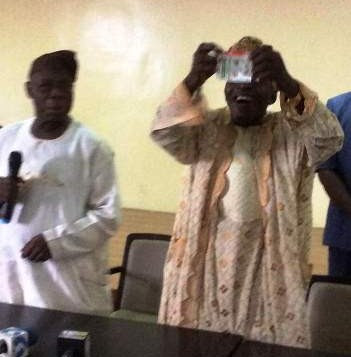 Here are Sanusi's perceptions, and how some people's actions and comments are playing them out.

In sum, the Yoruba political leadership, as mentioned by Balarabe Musa, has shown itself over the years to be incapable of rising above narrow tribal interests and reciprocating goodwill from other sections of the country by treating other groups with respect. Practically every crisis in Nigeria since independence has its roots in this attitude.

i. The Yoruba elite and area-boy politics;
ii. Igbo marginalisation and the responsible limits of retribution; and
iii. The Yoruba Factor and "Area-boy" Politics.
See also The Adulteress' Diary by Lamido Sanusi
My views on the Yoruba political leadership have been thoroughly articulated in some of my writings, prime among which was " Afenifere: Syllabus of Errors" published by This Day (The Sunday Newspaper) on Sept 27, 1998. There was also an earlier publication in the weekly Trust entitled " The Igbo, the Yoruba and History" (Aug. 21, 1998).
In sum, the Yoruba political leadership, as mentioned by Balarabe Musa, has shown itself over the years to be incapable of rising above narrow tribal interests and reciprocating goodwill from other sections of the country by treating other groups with respect. Practically every crisis in Nigeria since independence has its roots in this attitude.

The Yoruba elite were the first, in 1962, to attempt a violent overthrow of an elected government in this country. In 1966, it was the violence in the West which provided an avenue for the putsch of 15th January. After Chief Awolowo lost to Shagari in 1983 elections, it was the discontent and bad publicity in the South-West which led to the Buhari intervention. When Buhari jailed UPN governors like Ige and Onabanjo, the South-Western press castigated that good government and provided the right mood for IBB to take over power. As soon as IBB cleared UPN governors of charges against them in a politically motivated retrial, he became the darling of the South-West. When IBB annulled the primaries in which Adamu Ciroma and Shehu Yar Adua emerged as presidential candidates in the NRC and SDP, he was hailed by the South-West. When the same man annulled the June 12, 1993 elections in which Abiola was the front-runner, the South-West now became defenders of democracy.

When it seemed Sani Abacha was sympathetic to Abiola, the South-West supported his take-over. He was in fact invited by a prominent NADECO member to take over in a published letter shortly before the event. Even though Abiola had won the elections in the North, the North was blamed for its annulment. When Abdulsalam Abubakar started his transition, the Yoruba political leadership through NADECO presented a memorandum on a Government of National Unity that showed complete disrespect for the intelligence and liberties of other Nigerians.

Subsequently, they formed a tribal party which failed to meet minimum requirements for registration, but was registered all the same to avoid the violence that was bound to follow non-registration, given the area-boy mentality of South-West politicians. Having rejected an Obasanjo candidacy and challenged the election as a fraud in court, we now find a leading member of the AD in the government, a daughter of an Afenifere leader as Minister of State, and Awolowo´s daughter as Ambassador, all appointed by a man who won the election through fraud.

Meanwhile, nothing has been negotiated for the children of Abiola, the focus of Yoruba political activity. In return for these favours, the AD solidly voted for Evan Enwerem as Senate President. This is a man who participated in the two-million- man March for Abacha´s self-succession. He also is reputed to have hosted a meeting of governors during IBB´s transition, demanding that June 12 elections should never be de-annulled and threatening that the East would go to war if this was done. When Ibrahim Salisu Buhari was accused of swearing to a false affidavit, the Yoruba political elite correctly took up the gauntlet for his resignation.

When an AD governor, Bola Tinubu, swears to a false affidavit that he attended an Ivy League University which he did not attend, we hear excuses.
For so many years, the Yoruba have inundated this country with stories of being marginalised and of a civil service dominated by northerners through quota system. The Federal Character Commission has recently released a report which shows that the South-West accounts for 27.8% of civil servants in the range GL08 to GL14 and a full 29.5% of GL 15 and above. One zone out of six zones controls a full 30% of the civil service leaving the other five zones to share the remaining 70%. We find the same story in the economy, in academia, in parastatals.
Yet in spite of being so dominant, the Yoruba complained and complained of marginalization. Of recent, in recognition of the trauma which hit the South-West after June 12, the rest of the country forced everyone out of the race to ensure that a South-Westerner emerged, often against the best advice of political activists.

Instead of leading a path of reconciliation and strong appreciation, the Yoruba have embarked on short-sighted triumphalism, threatening other "nationalities" that they ( who after all lost the election) will protect Obasanjo ( who was forced on them). No less a person than Bola Ige has made such utterances.
To further show that they were in charge, they led a cult into the Hausa area of Sagamu, murdered a Hausa woman and nothing happened. In the violence that followed, they killed several Hausa residents, with Yoruba leaders like Segun Osoba, reminding Nigerians of the need to respect the culture of their host communities. This would have continued were it not for the people of Kano who showed that they could also create their own Oro who would only be appeased through the shedding of innocent Yoruba blood.
I say all this, to support Balarabe Musa´s statement, that the greatest problem to nation-building in Nigeria are the Yoruba Bourgeoisie. I say this also to underscore my point that until they change this attitude, no conference can solve the problems of Nigeria. We cannot move forward if the leadership of one of the largest ethnic groups continues to operate, not like statesmen, but like common area boys
at February 16, 2015