ELECTION POSTPONEMENT, THE TRUTH APC GOVERNORS AND INEC ARE NOT TELLING US.

This is a line in the “Sucker Punch” of James Hadley Chase that describes The All Progressive Congress (APC)
“It’s when a man is full of confidence that he’s wide open for a sucker punch.
I’ve seen it again and again. In my own racket, a man committed murder.
He took a lot of thought and trouble to cover up. All he imagined was he was free,
but he wasn’t. Just when he least expect, he was down on his back, with something
coming to him a damn side worse than a busted jaw”

Prior to the announcement that the Feb14th poll as earlier scheduled by the Independent National Electoral Commission (INEC) has been postponed by six weeks, the almighty Council of state had met Wednesday and the outcome of the meeting as told us by APC governors was that PDP governors were the ones pushing for a shift, which the council, made up of all past and present Chief justices of the federation, all past and sitting Presidents or Heads of states, the Senate President, the Speaker and all the thirty six (36) states governors rejected the call, and agreed that the Valentine’s day election would hold as scheduled, prompting some of us ‘News merchants’ to go to the market with our wares, posting, commenting and informing our listeners that the much anticipated shift would not happen after all. They didn’t just stopped there; they went on in their typical cynical, propaganda and fault finding nature as seen by the governor of Lagos State, Governor Fashola in a campaign ground somewhere in Lagos. He accused the government and the PDP of being afraid of losing, hatching a coup against democracy and all sorts. 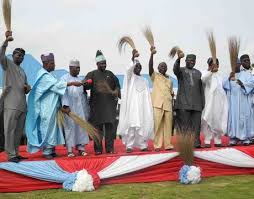 That put pen to paper, and the assurance informed jubilations and calmed anxieties in most some quarters, until some hours later, when we started hearing again that the INEC boss, Prof Atahiru Jega and his states’ residences commissioners would be meeting again in two days’ time, being Saturday to consider if it would postponed the election or not, the outcome being the current stands by the electoral body that the election has to be shifted as a result of the military’s none guaranty of security to INEC staff, materials and the citizens at large on the stipulated date of feb14. None of them admits that INEC is not prepared with all the lapses noticed and being talked about. Like the recruitment and training of 7,000 ad-hoc staff, the outstanding PVC still pending where they’d been contracted to, none issuance of over 34% of PVCs and lots of others. They choose to play to the gallery all in the name of opposition, just as the INEC boss is, also afraid to admit that he had once again allowed the Nigerian syndrome of not being serious with serious issues until final minutes score on him and his commission. So it was with lots other national issues like the fuel subsidy removal that boomeranged on the President, which he’s still being vilify for. They were all part of the meeting that rectified and approved that the subsidy should be removed because it would mean more allocation. But when it boomeranged they distance themselves immediately and even joined in knocking the President. What about THE SOVEREIGN TRUST FUND, meant to save proceeds from the excess crude? We forget so soon that once upon a time, not too long ago, Governor Ameachi of River’s State and some governors vehemently opposed the President and the Finance and the Coordinating Minister of the Economy not to save any money, but to share as it comes, even up the extends of going to seek interpretation from the court. And now everyone is using it for campaign and pointing accusing fingers at the President for corruption and refusing to save for the rainy day. Just as a caller called in on a radio programme last week and pointed out “When you say that the President is corrupt because he is not checking corruption, what is the judiciary, national Assembly and others, even up to the states doing?” Not forgetting the opposition, as they have members in the National assembly. “Are all these not issues?” She asked.

The call to postponed election was first muted by Pastor Tunde Bakare, before the National Security Adviser NSA, then Alhaji Balarebe Musa and other concern stake holders, who read the hand writing and concluded that INEC couldn’t have been ready like this. And should you be the commanding in chief, who swore to uphold the right of the people, would you had allowed election to hold amidst all those fears and discrepancies pointed out? And who deceived APC that they’re going to win any way? Don’t they know that the tide of election is like playing against Chelsea FC? You have not won until the final second, after the whistle has gone up. This type of false confidence is what would send people killing themselves after the result is out and didn’t favour them, as they would conclude that the election had been rigged, that too they are not telling us.