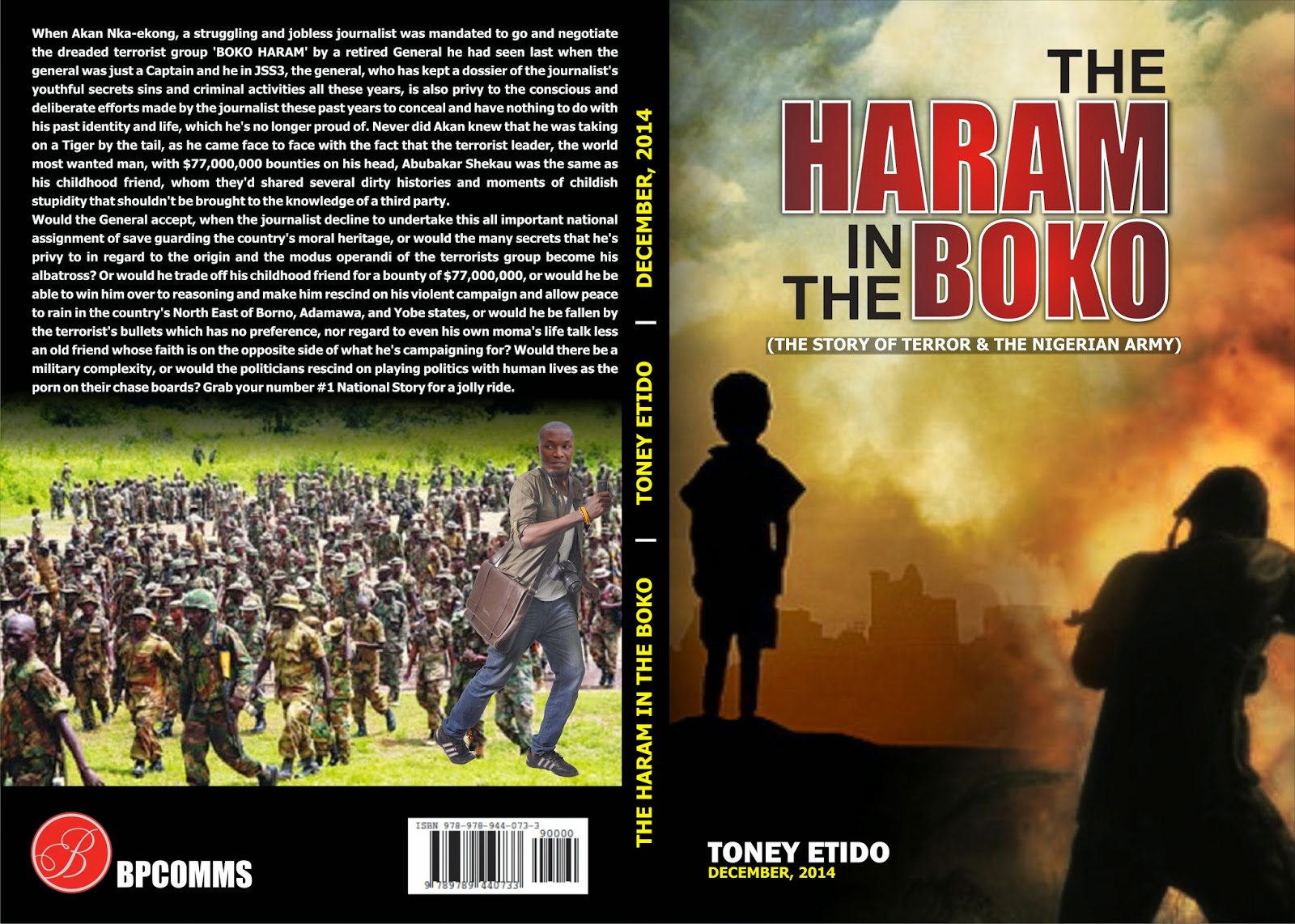 In The fictional Novel, "The Haram In The Boko" (The Story of Terror And The Nigerian army, The Author went into the military barracks and captured a fascinating story he feels should be national unity story irrespective of how ugly.

Hear him in this excerpt from the novel---

The usually derogatory remarks made toward some tribes, religions, people and others that often result to the many fracases that has now so polarized and set the once united and promising country on the brink of disintegrating in to unimaginable and uncountable pieces should be sternly and deliberately discouraged. Names like Wilagar, Idongesit, Krukrubor, Murbo, Alade, Odumegwu, Ajara, Gogobri, Gambo, Abubakar, Owolese, Balijir, Dukule,Nampin Gotom, Nanji, Ngiang, Ndafantana, Tangale, Lunguda, and many more unimaginable senseless sounds that could mean nothing, but mockery and disdain to many and yet mean the world to others at the same time, are common in the barracks, as we relate, survive, laugh, get silly, fight and disagree, enter in to an alliances for a course and dissolve and above all, always preserve the sanctity, unity, and integrity of the nation they are proud of and ready to share with others without selfishness and greed.  The ecosystem that exists in the barracks, most especially a military barracks is second to none.

Some of the stories of happenings in the barracks are the stories that should be told no matter how ugly as part of a national story for national integration and harmony. Not coup and overthrow of government’s stories and soldiers who looted the country’s wealth and thwarted the country’s development, but the regular, human stories that trespass in those enclaves call barracks. And this is the story am going to tell.

Here is another Excerpt-----

This morning, still basking in the euphoria of the military part one order and the announcement of an outside peace keeping operation in Sierra Leone which kind of offers what to talk about among military dependents, most especially in this holiday. The boys’d congregated early to see if there was anything they left out last night when unexpectedly, another drama suddenly unfolded, a typical daily barracks occurrence you’ll say.

We rarely knew what happened, all we saw when we turned was Mama'n Ibrahim locked in a heated disagreement with Michael, and her claws clucked tightly on his shirt’s collar.
Michael is an idiot, and he lacked respect for elders, and only God knows what he might've done or said to this peace loving, free spirited and accommodating woman this morning to have aggravated her temper this much.
"Kai! Kutumma’n Mburo ubanka" She cursed, tightening the grip that made Mike find it difficult to breathe, but for his pride he was still threatening to deal with the woman, despite the obvious fact that he was dying.
"Madam I'll slap you oo" He managed to threaten in between his choked breath, which even annoyed the woman the more.
"Islapi mi, you small boi islapi mi?" she demanded in anger with her passable English, as she kept jacking and shoving him back and forth violently.
"Okay mi islapi you" She promised him, landing him some not too pleasant hot slaps, still not letting him out of her grip.
I love and hate Michael, my friend at the same time. Though we sort of have mutual respect for each other when it comes to mental prowls, as we're both on the A list pupil from the very first day he joined my class in primary four, after his father was transferred from the Armored training school, Bauchi a few years ago to our base. I hate and seldom do some things with Mike because nothing is a secret with him, and I love him because of his extreme extroverted nature which comes with some social privileges and penalties as well, not as if I was lacking in my social grading myself, but just sometimes Michael’s carefree nature can get things done and can also cause you some things valuable or still get you in to trouble just like today. So it’s up to you to decide.
Michael, whose nick name was Boy Alinko, christened after a character in a popular rested comic magazine "Papa Ajasco" because of his hair cut which is the exact replica of the Ajasco character in the rested comic magazine is a trouble to anyone he's involved with either in the class, football team, or anywhere. If he's not singing Bobby Brown's "Baby we have something in common" and moon walking, he'll be looking for whom to dance with without exception, or touching what he's not supposed to touch anytime he comes to your house. A hyper active fellow I sometimes wished he was my father's son.
Like today he'd just started his dance in the crowed of busy bodies before he suddenly stepped on the conservative Muslim mama'n Ibrahim, and when she voice her pain, he tried asking her for a dance as if she was his babe, which pissed her up and made her feel abused and disrespected. Michael was actually maiming a Keith Sweat's "Can we talk for a minute" when he landed faultily on Mama’n Ibrahim which am sure wasn’t deliberate.